The Lowe Down & Puerto Escondido

HUBBOX pro surfer Tom Lowe gives us the #thelowedown on the biggest swell ever surfed at Puerto Escondido and life after Big Pink.

How long were you in Puerto Escondido?

I went for just over two weeks planning on it being a one week trip and then saw the second swell about to arrive whilst I was there. I didn’t have the best luck on the first big swell. So when another one came at the end of the week, so I extended my ticket, which was the best decision I ever made because I ended catching some pretty special waves.
I travelled on my own and I wasn’t feeling very well, I was actually pretty sick, so it wasn’t the best confidence boost on the way over. It was the biggest day ever recorded in Puerto Escondido. The waves were absolutely massive, the biggest waves I have ever paddled for sure. It was definitely the most challenging conditions I have ever had to deal with.

Who did you hang out with out there?

The people I linked with over there were just the usual faces which turn up on the biggest swells of the year, you know, people like Derek Dunfy was there, Rusty Long, Twiggy, Mark Healy who ended up catching the biggest wave ever paddled in Puerto Escondido and he was right next to me when he took off. It was pretty incredible to watch, had I been in that position who knows, I probably wouldn’t have gone. It was cool to watch and learn.

Was it the biggest swell you’ve ever seen?

I have seen bigger swell in Ireland, but it’s always been, again, very dangerous, very cold and very uninviting. I’ve seen giant waves, 100ft on a handful of occasions, but there is no water safety out there, there is no one else around, it’s just you and a couple of friends and it can be very daunting. It feels different, you’re not in the tropics all nice and warm. Actually that first huge day in Mexico, we didn’t have barely any water safety so it was really dangerous but you’re still in board shorts and it’s very hot and relaxed. You can hold your breath longer. But because of the way the waves break, right up to the shore, if a wave crashes on you more often than not, you get washed up on the beach but if you’re unlucky, then you can get yourself in some very dangerous situations.

Was it quite far out?

You have to paddle for an hour and a half just to get into where the waves are breaking from a little harbour. With this particular wave, what makes it so powerful is that it comes from very deep water suddenly into a large build-up of sand bars and by the time it hits the shore, it’s got all that energy from the deep underwater canyon and that’s what’s make it very dangerous because it’s really thick and heavy water.

Why did you extend your trip?

It was like it was given another chance really. That first swell was the biggest swell in history down there, it was humongous and everybody who caught waves that day basically didn’t make them. It was really dangerous day. I was sat in the water waiting for a wave and a enormous wave broke up and cleaned us out, washed us all the way in and snapped our boards. That was the end of our day. A lot of people wasted a lot of energy and I felt pretty depressed after that first swell, even though it was a great learning experience, you put all that energy into it and then it doesn’t work for you, it is quite disheartening.
Then this other swell came so I basically recovered within four or five days from my flu, I probably sweated it out, it’s so hot down there! I felt really good leading up to the second swell. Everything came along a lot better. I think it was just the fact that I had acclimatised to all that traveling and got use to everything there, I watched the waves a lot, I learned a lot, even just from that week being there, I learned about where the waves were breaking and I felt in tune with the water.

We saw some pictures of a massive wipeout you had on social media, can you talk us through what happened?

I had waited for about an hour and half for my turn and stayed in my position, it was very busy with 20-30 guys behind me. The whole thing was pretty intimidating, the waves, the place, the people. I tried to find a little gap and paddle for it, I thought someone’s gonna call me in for it which is always nice, people usually shout you name “go Lowey” and then you feel more confident that that’s your wave and you’re in a good place and commit to it. I turned around for that wave and if I had made it it would have been potentially the wave of the swell. It could have been an incredible ride. But instead, a couple of other people decided to paddle for it, and I kind of hesitated for just that second and it only takes one second to put you out of position and into the worst case scenario. I kind of stopped but it was too late to pull back and a combination of things happened. I felt like I was in the wrong spot but I went anyway. I felt like I didn’t have a choice. What happened ended up being ok, I realised I didn’t have a hope in hell to make the drop so I just jumped and it’s kind of a trade mark for me now, classic Lowey “pencil” they were saying. I don’t know if that’s a good thing. I came out of it alright, I got washed up on the beach, but I did snap my favourite board. 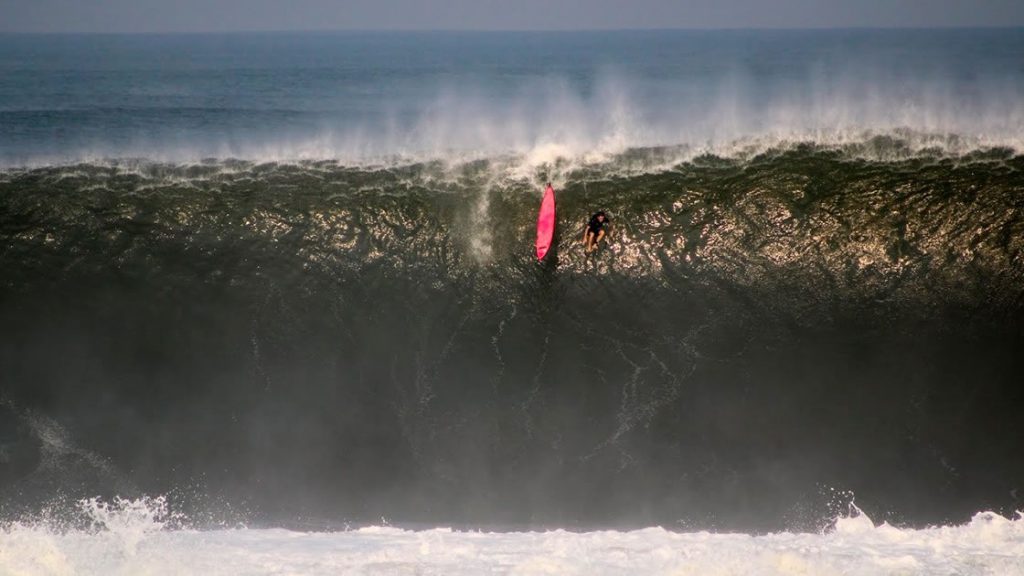 How is the ‘Big Pink’ doing now?

It snapped clean in half and when I saw that, I thought “what an idiot!”. I hadn’t had a wave in two days I had been there, and that the first wave I paddled into, the day before I snapped another board after a huge day and I didn’t even paddle for a wave, a wave landed on me, I was in a pretty bad frame of mind. It was hard to be positive in that situation but you have to just walk off and say “ok, well at least it’s not me”, “it’s just a board, it’s fine”. But in reality, you sit in in the evening and think “what the hell I should have done differently, I should have waited…” and all these different things. But I managed to repair the board, it’s all good.

You managed to come back without any big injuries but did see anything nasty?

A friend of mine called Trevor got knocked unconscious and you know being unconscious underwater is as bad as it gets. He woke up with a dislocated his shoulder but luckily the lifeguards pulled him in and he was alright but there are lifeguards on duty there and they are very good at what they do but they can only do so much. They do have a jet ski but you know the water out there moves so much. You only have to watch. Somebody was videoing the sea even when waves weren’t coming, the water never stopped moving. It was like fast-flowing river rapids going in all directions, ferocious. Someone else ended up with a broken femur. Those two are probably some of the worst injuries.

What have you learnt from Puerto Escondido?

I think it was another reminder that when you’re dealing with nature especially, like we are, more than in any other sport, you can’t control it and you shouldn’t try and I suppose I learnt to go with the flow as such, go with it, don’t try and force a wave to come to you or force yourself into a wave, be more patient. And if you’re more patient and take a wave and don’t make, well as long as you’re alright, it was just humbling reminder that we are not in control of our fate and just roll with it.
I didn’t catch anything that’s legendary as such, I did catch the ride of the year or my best ride ever. but I had some epic rides I’ll remember. I am happy with how it turned out. 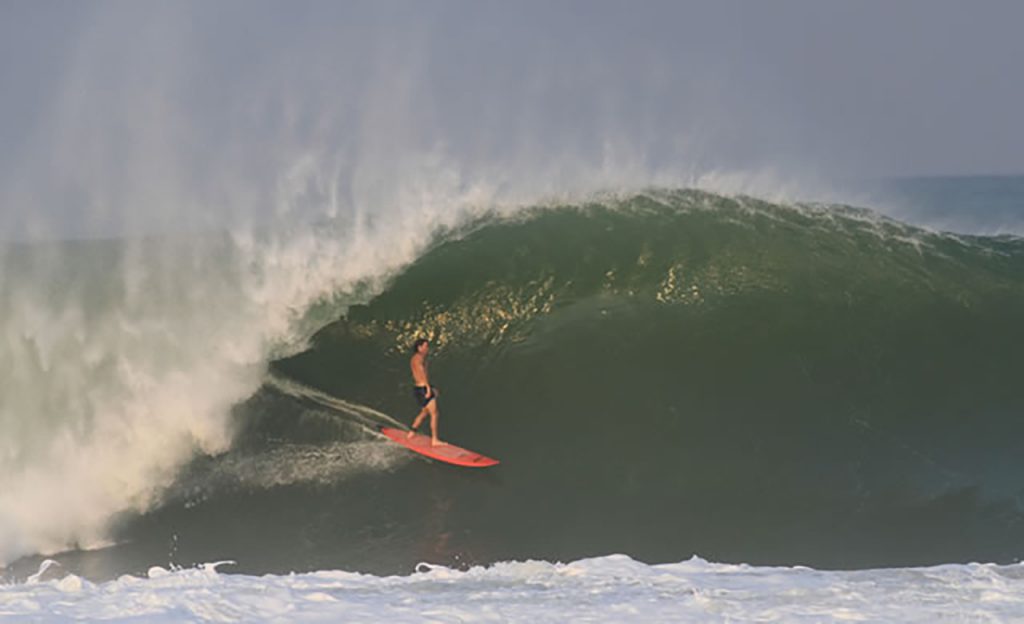