It really is shaping up to be the year of the HUBBOX. After a series of accolades earlier on this year we have just done it again – this time it’s much closer to home and voted for by you the burger eating public. We have just won the Best Burger Joint award at the What’s On Cornwall Awards 2015! 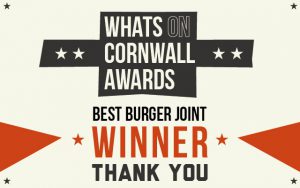 We’re thrilled have been picked by the readers of Cornish Guardian, West Briton and Cornishman who casted their votes for the 13 categories in the competition.

The WOCA are a series of awards run by Cornwall’s largest newspaper group. Focusing on the region’s entertainment and hospitality industry, categories are ranging from the best local comedy act, to the best local festival, pub and music venue. You can see the full list of categories and winners here.

“We’re over the moon to have won this award, it means a lot to us to have been chosen amongst other great burger venues by Cornish readers themselves”, said Richard Boon, HUBBOX managing director.

The award ceremony held at the Eden Project was presented by What’s On editor Lee Trewhela. Shortlisted alongside St Ives’ Blas, Fowey’s Sam’s and Launceston’s Firebrand for the second edition of the WOCA’s, the trophy was handed to us by Mark Sainsbury, managing director of DC Media.