Hub Box has been a part of Exeter’s rich food and drink scene since they opened their doors on Sidwell Street in early December 2013.

Six years, and over half a million burgers later, the team have opened their new site. It’s still the Hub Box customers know and love, but with an evolved offer in a bigger, better, fully pimped out site on Catherine Street.

Their original Exeter site was a modest, yet busy, thirty-six cover restaurant. The new place will be an all day eating and drinking venue, set across two floors.

‘To say we’re excited about our move is an understatement. We can’t wait to show you what we’ve done with the place,’ says CEO, Richard Boon.

Born out of Hub, situated on the harbourside of St Ives, Cornwall, Hub Box originally launched serving burgers from a shipping container in Truro city centre in 2012. Their trip up the A30 to Exeter saw their first bricks and mortar Hub Box site, last October saw their latest restaurant open in Taunton and now, they start 2019 with their latest redevelopment.

‘We’re really excited by this new venue. We passionately believe that investing in our High Street is important and Exeter has, so far, been an amazing part of our story. What we’re about to do in Catherine Street will set us up as a mainstay in Exeter’s food and drink scene for years to come.’

The new Exeter restaurant sees the company employing a further twenty people, bolstering the current team to allow them to serve up to 170 covers at any one time.

The interior, with its larger dining area, bar and rooftop terrace has been inspired by the company’s roots and nods towards the sea and nautical history of the South West. The new kitchen allows broader menu options in addition to their signature burgers and fries. The team are introducing new dishes cooked over hot coals on a BBQ charcoal grill evoking memories of family beach barbecues and good times with friends, eating and drinking as the sun goes down.

Key to all this, is the importance Hub Box places on strong relationships with its key produce suppliers, all hailing from the Southwest: Phillip Warren Butchers, Baker Tom Bread, Colwith Farm Potatoes, Matthew Stephen’s Fish, The Cornish Cheese Company, Origin Coffee Roasters, Cornish Sea Salt, and West Country Fruit; all of which will be supplying the new restaurant.

‘It’s our belief that if you offer a quality product, fairly priced, in cool surroundings, people will seek you out. We all know that towns are having to work harder to attract and retain shoppers. We want to be part of the solution, but for us, it’s not all about stretching our budgets to place ourselves in highly priced, High Street locations. Catherine Street is the perfect new move and we’re committed to our future there.’ 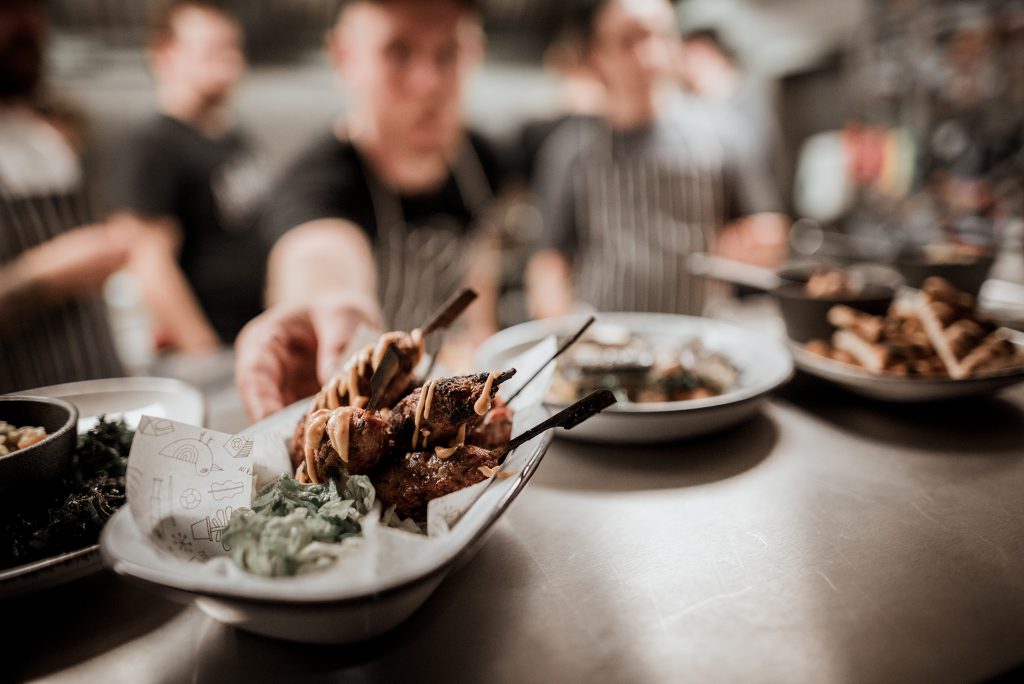